Here's a little look back at probably one of my favorite creations. It was made when after I moved away from home to the city of Liverpool for a few years. I would often miss the country and my parents house, which is in a small valley in North Wales, with a ruined castle over looking it. When I was younger I always envisioned building a coaster in one of the fields (haha). So after picking up Newton 2 for the first time and developing an interest in the out-and-back B&M hypers, Apollo's Chariot in BGW, Behemoth in Canada and (at the time) the newly constructed Intimidator in Carowinds I realized the perfect opportunity to actually show what I always visualized when I was younger.


I first started with a few layouts, it had to be a big ride, with a nice hammerhead. That was my first goal. Here's one of the many layouts I tried out. 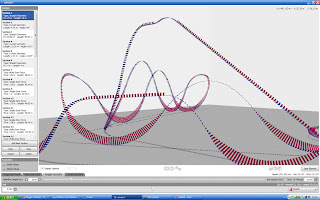 It initially had a predrop like Raging Bull, but it wasn't modern enough. I struggled to get the transition right between the lift and the force based multizones, and actually I never really found a way to get that right on this ride! As a few helpful members on NoLimits-Exchange and CoasterCrazy pointed out. Sadly when it was pointed out, it was a little too late to change. Fortunately not everyone noticed.
So I changed all that layout, managed to get a first drop, first hill, hammerhead and second hill I was happy with! But I was stuck with what to do next, I initially had the ride going right and following the lift back, but it was abit messy, I turned to my close friend Andre (CrazyCoaster to the NL Comumunity) and he suggested and went off the the left and create a Y/T shaped layout. With this advice I reached that great moment when you're designing of thinking "ok, I'm going to finish this". 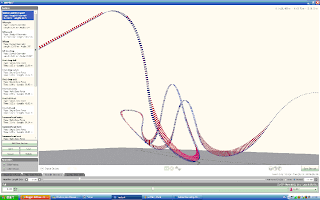 The next part of the ride I'd been watching too many POVs of Apollos Chariot and decided I need that helix It took a while to do and my version had abit more punch with it's forces (maybe a little too much). I also loved how on Behemoth and Diamondback they had this upward helix, then a dive out of it near the end of their rides. I decided to do a bigger version of it, to complete my little helix medly, with a MCBR to break them both up.

The rest of the ride fell into place fairly easily, with a need for some air-time after the helices and then a finale inspired by a hybrid of the end of Apollo's Chariot and Silverstar (which imo, are the best finales on all the B&M hypers). The layout was complete! I started colouring the ride with the colours of Wales, white, red and green. 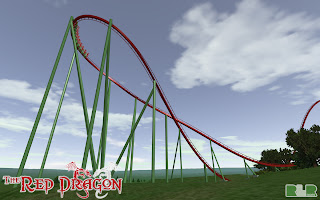 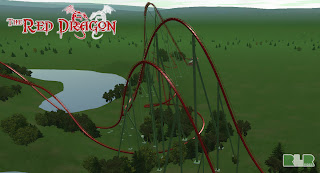 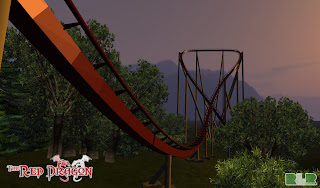 The ride logo and theme was always in the back of my mind for this, and fairly quickly came to fruitation on this ride. Usually all that gets sorted after most the ride is supported. It was starting to come together and liked how it looked, but it needed something extra, with it taking up most the NL Editor space, I needed something to break it up a bit. This is when I turned to Andre again, he had some free time and agreed to help out.
Me and Andre have always had different styles with NL, he loves Disney and complete theming immersion. He could probably create a whole country to put his ride in! haha. It works well though and I appreciate his work he's an artist in what he does, it's just different to what I go out to achieve. I like my rides to be in the foreground, have theming where it matters, get an atmosphere. But I like letting the ride boldly standout in the skyline. It may not be the most popular way of working, but it's what I enjoy.
Anyway, for this reason we never really worked together until now. Consistently helped each other out though. He got to work, with a few crude paint sketches I sent him. 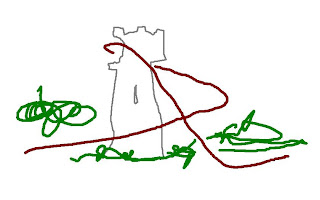 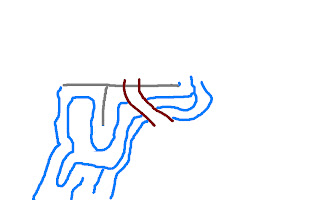 He built an amazing station for me. I told him I wanted a ruined castle, similar to the one near my childhood home, but made to look like it's been ruined a long time, with modern wooden platforms like The National Trust have come along to allow people to see it. In the story of "The Red Dragon" this castle and the tower would've been the castles that King Vortigern tried to build, that collapsed due to the dragons sleeping beneath it. 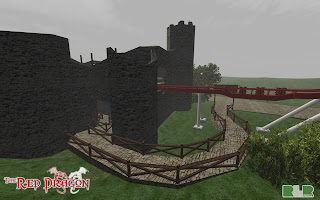 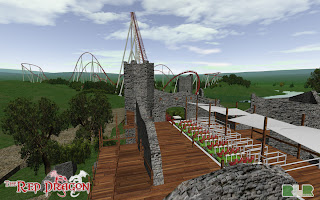 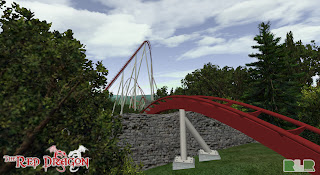 So the ride was almost complete. Andre added him own flare to the ride by adding his own touch, of a mist filled tunnel before the MCBR, ending up as probably being my favourite part of the ride. Then with a video, some car textures and all the final touches, the ride was finally ready to be released. 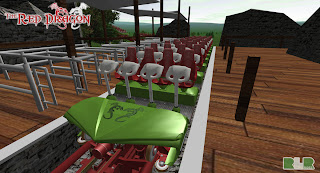 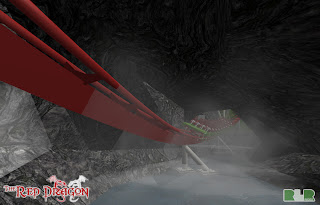 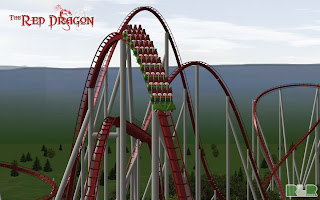 So here's the finished product, enjoy your ride. You can also download it for your own viewing at the Nolimits-Exchange and CoasterCrazy.com
The music from the POV comes from Laura Marling's album I Speak Because I Can. I listened to it ALOT when doing this ride <3.
Posted by RLRides at 15:08